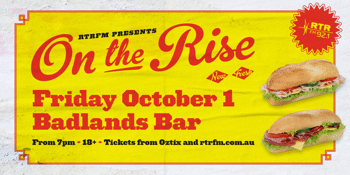 RTRFM, the home of local music, introduces new event On The Rise to showcase some of the city's finest emerging bands at Badlands on Friday 1 October.

The first edition of this event features newly-formed bands as well as acts honing their first EPs, offering them the opportunity to broaden their audience and gain live experience.

On The Rise has also saved two spaces on the line-up for emerging artists who wish to apply directly to RTRFM. Two bands will ultimately be selected by RTRFM’s Breakfast Presenter Taylah Strano and Music Director Matt Perrett for their biggest gig to date.
With a stellar roster already locked, On The Rise is the station’s nod to those bands who will eventually grace the In The Pines, WAM and Perth Festival stages in coming years.

Plus two more acts to be announced. To apply to play head to rtrfm.com.au/ontherise
Tickets available now via Oztix.com.au or RTRFM.com.au.
This event takes place on Whadjuk Country and we pay our respects to Noongar elders past, present and emerging.