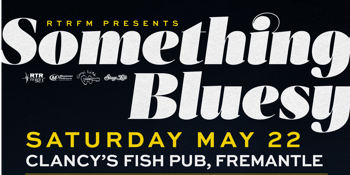 RTRFM brings the Blues and a bit of roots to  Fremantle with Something Bluesy.

RTRFM brings the Blues and a bit of roots to Fremantle with Something Bluesy.

Join us Saturday May 22nd as we take over the main room and outside space at Clancy’s Fish Pub and bring you some of the city's finest blues and roots bands.

Inside you can catch sets from the journeyman blues of Luke Dux Atomic Lunchbox, the laid back vibes of Tom Fisher and The Layabouts, the rhythm heavy roots of The Whiskey Pocket and the straight up blues sounds of Empire Blues.

And on the outside stage catch the beautiful sounds of Kat Wilson, the songwriting genius of Lincoln MacKinnon in trio mode and the troubadour sounds of Albert Loss in solo mode.

More acts to be announced.

Some of the state's finest on a lovely autumn evening in one of the city's best live music venues.

All proceeds go to RTRFM.

WHEN: Saturday May 22nd